Discover all the secrets of alici's colatura 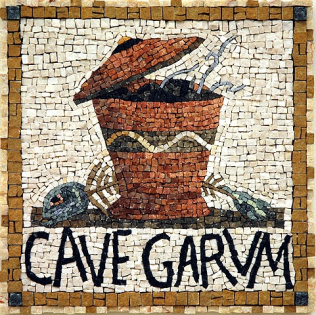 Colatura di Alici has very ancient origins: according to many gastronomes it derives from the Roman "garum", a tasty liquid that was used to season succulent meat, chicken, lamb and even vegetable dishes, instead of salt. This liquid was stored in “amphorae” indicating the year of production and quality; the best was certainly the "Garum excellens" which was obtained from anchovies and tuna belly.

On the Amalfi Coast, origins of anchovy sauce date back to the 13th century and is attributed to the Cistercian monks of the Ancient Canonical of Saint Peter “in Tuczolo”, on the homonymous hill near Amalfi. Monks used to salt the anchovies caught between May and August in barrels whose staves, which time had taken off, were no longer suitable for keeping wine. A heavy boulder was used as a press on the roof. The excess liquid that deposited and dripped on the bottom, was so fragrant that the monks decided to pick it up and take it to the kitchen to dress the vegetables and cooked vegetables (broccoli, potatoes ...). Success was so immediate that the monks gave some of the amber liquid to the inhabitants of the neighboring countries and to the other convents. Everyone starts to strive to produce it at home, until someone came up with the brilliant idea of using the same cap that was used to separate the wine from the must to filter the sauce and make it more limpid. Thus the fine Colatura of Cetara city anchovies was born.

How to achieve Cetara Anchovies Colatura

The process to carry it out is quite laborious. Anchovies, freshly caught, strictly in the Gulf of Salerno, in the period between March 25, Saint Mary’s Annunciation celebration, and July 22, Saint Mary Magdalens’s celebration, are beheaded and eviscerated by hand, and then arranged with classic "head – tail" technique in alternating layers of salt and anchovies, in a special oak wood container called “terzigno” (one third of a barrel).

The choice of the period is fundamental because the phases of the cycle life of the fish, anchovies have a low fat content and are particularly suitable for salting process.

Once layered arrangement is completed, the “terzigno” is covered with the “tompagno” - a wooden disk - on which weights (usually marine stones) are placed. As a result of the pressing and maturation of the anchovies, a liquid begins to surface on the surface which is collected and subjected to a natural preservation process with exposure to sunlight.

After about 4-5 months, the liquid that was collected in the previous months is poured back into the terzigno in order to make it collect the best of the organoleptic characteristics of anchovies. After passing through all the layers, the "pouring" liquid is recovered through a special hole made in the terzigno and transferred to another container. From here filtered with the use of special linen sheets, named "cappucci" and finally left to rest in the sun.

The result is a clear amber-colored distillate, with a strong and full-bodied taste.

Anchovies colatura is rich in vitamin A and easily digestible, it can be enjoyed together with a few fresh aromas such as: parsley, garlic, chilli pepper and a good extra virgin olive oil, mixed at the time to season linguine or spaghetti pasta.

In ancient times, Anchovies colatura was used in Cetara city only for seasoning spaghetti or linguine pasta on Christmas time.

Today, thanks to the passion and knowledge of the “Delfino Battista company”, it can be used not only to cook famous spaghetti dishes, but also as a refined condiment used to flavor salads, risottos and fish fillets, instead of salt.

If you want to taste the flavour of the colatura click here to order it!