The Municipality of Praiano is located between Amalfi and the nearest Positano and is an ancient fishing village. It is less famous than the neighboring Positano but allows the numerous tourists who visit the coastal center to observe a unique and enchanting landscape: in fact, the Doges of the Maritime Republic of Amalfi already chose Praiano as a tourist residence and therefore a destination for their holidays.

The inhabited center of Praiano rises on the mountainous ridge of the Lattari Mountains which from Monte Tre Pizzi reaches Capo Sottile, to the east to the Marina di Praia and to the west to the Vettica Maggiore hamlet and precisely the particular conformation of the territory together with a mild climate, crystal clear waters, jagged coasts and sheer cliffs interspersed with very characteristic small beaches, make Praiano a real pearl of the Amalfi Coast. In addition, the Praiano area is crossed by numerous stairs that allow you to reach the various coves and different viewpoints from which you can admire a clear sea, the Faraglioni of Capri, the Isle of Capri, Positano and the De Li Galli Island. These paths are mainly surrounded by lemon groves and the typical vegetation of the Mediterranean maquis but, even if they are often considered rather hard to travel, they always repay the tourist for the scenarios they offer. Finally, the stairways have preserved the typicality of the places, allowing them to still be uncontaminated. In Praiano you can observe one of the most evocative sunsets of the entire Amalfi Coast since, while the sun slowly falls behind the hills of Positano and the island of Capri, the sky is tinged mainly with the orange of the sun and other shades making the even more magical and beautiful place.

Due to its particular geographical position, Praiano is divided into 2 parts:

-        The upper part where the hundred citizen is present and the various houses scattered throughout the territory surrounded by terraces and vegetation of the Mediterranean scrub;

An exclusive feature of Praiano is represented by the many votive niches present in the municipal area: in the past when families lived on a new property, they built small altars with sacred images. The aim was mainly to protect the inhabitants of the house but also the right to live on a specific property. The construction of these small altars testifies to the importance that the Christian religion had already from ancient times.

If you are in Vietri sul Mare, you must take the Strada Statale 163 and, after reaching Amalfi, you need to proceed to Positano. From Vietri sul Mare there are about 30 km to go to get to Praiano and the road, although it is one of the most panoramic in Italy, has numerous hairpin bends.

From the crystal clear waters of Praiano, fresh fish is caught which is the basis of many first courses: among the many, the "tubetti with squid" and "squid and praianese potatoes" predominate.

Praiano is also famous for the "Migliaccio": it is a typical dish of the carnival period.

The preparation of the "Migliaccio Praianese" is as follows: halfway through cooking the pasta, drain part of the water from the pasta and add the semolina to allow it to be absorbed. Subsequently also the lard should be added. Once cooked, add a mixture prepared separately consisting of: beaten eggs, grated cheese, salt, pepper and a pinch of cinnamon. After mixing the mixture with the pasta, possibly mixing with a wooden spoon, arrange half of the pasta in a non-stick pan and add the mozzarella or caciocavallo and the crumbled sausage and cover everything with the remaining half of the pasta. Simmer on both sides and serve in wedges.

Probably in ancient times the name Praiano meant "open sea" since it was first called Pelagianum and later Plagianum. Precisely because of the "open sea" feature, the first Greek merchants landed along the Praiano coasts, giving rise to the first commercial exchanges. With the Maritime Republic of Amalfi the territory of Praiano constituted an integral part of the Republic and, as mentioned, became the summer residence of the Doges. At the time in the upper part of Praiano the inhabitants mainly dedicated themselves to agriculture and pastoralism while in the marine part fishing began to develop. In 1278 Carlo I D'Angio had the Assiola Tower built in Praiano and subsequently, as a demonstration of fishing and commercial traffic, a dock for ships called "scarraturo" was built.

Furthermore, in the lower part of Praiano and mainly in the village of Marina di Praia, the silk, linen, boat building, salting of anchovies and above all coral activities were developed which at the time was considered a good trade also if rather sacrificing.

In the past, women also contributed to the sustenance of families in Praiano: first they arranged the fishing nets of the fishermen while then they braided the ladies' hair forming nets to contain the "tuppi". With the passage of time the latter activity of hair accommodation became increasingly sought after and profitable.

Praiano boasts many of the landscape and historical-artistic beauties such as:

-        The Convent of Santa Maria a Castro and the event of the Illuminations of San Domenico; 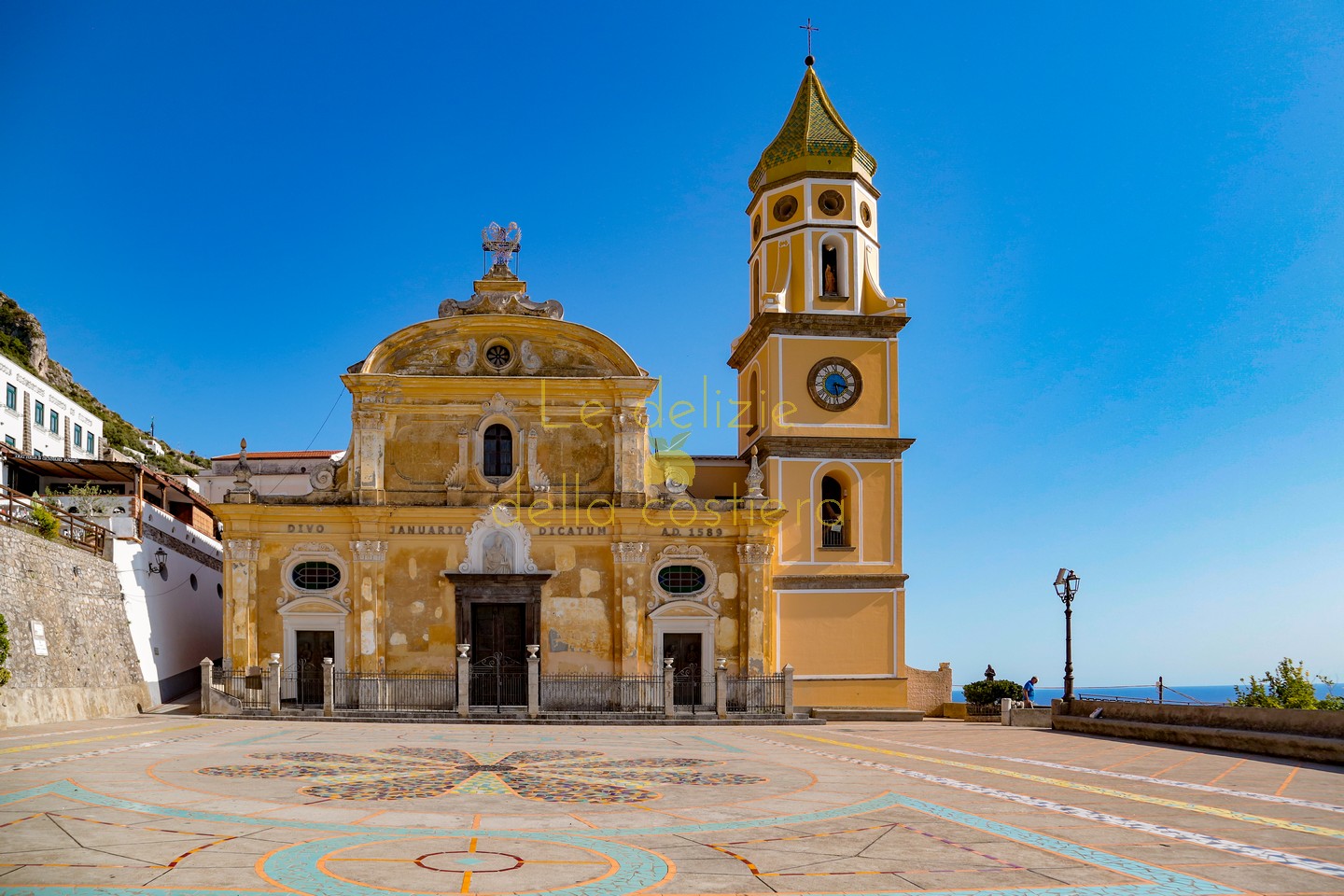 - The Church of San Gennaro

The Church of San Gennaro is located in the hamlet of Vettica Maggiore and was built on the ancient ruins of the church of the year 200. It is composed of three naves and both the dome and the bell tower are covered with ancient Vietri maiolica.

- The Church of San Giovanni Battista

The Church of San Giovanni Battista is located in the center of Praiano and consists of a single nave with a barrel vault. Of great value are the majolica floor and the pipe organ.

- The Church of San Luca Evangelista

The Church of San Luca Evangelista is the parish church and is located in the upper part of Praiano. It has three naves and is in Baroque style. At the center of the majolica floor of the 1700s is the Patron Saint of Praiano: San Luca.

- The nativity scene in the rock

It is a magnificent nativity scene in the cave created by a local artist and visible from the Strada Statale 163 Amalfitana: the miniature Praiano area is depicted with marinas, towers, stairways, houses, boats and fishermen. 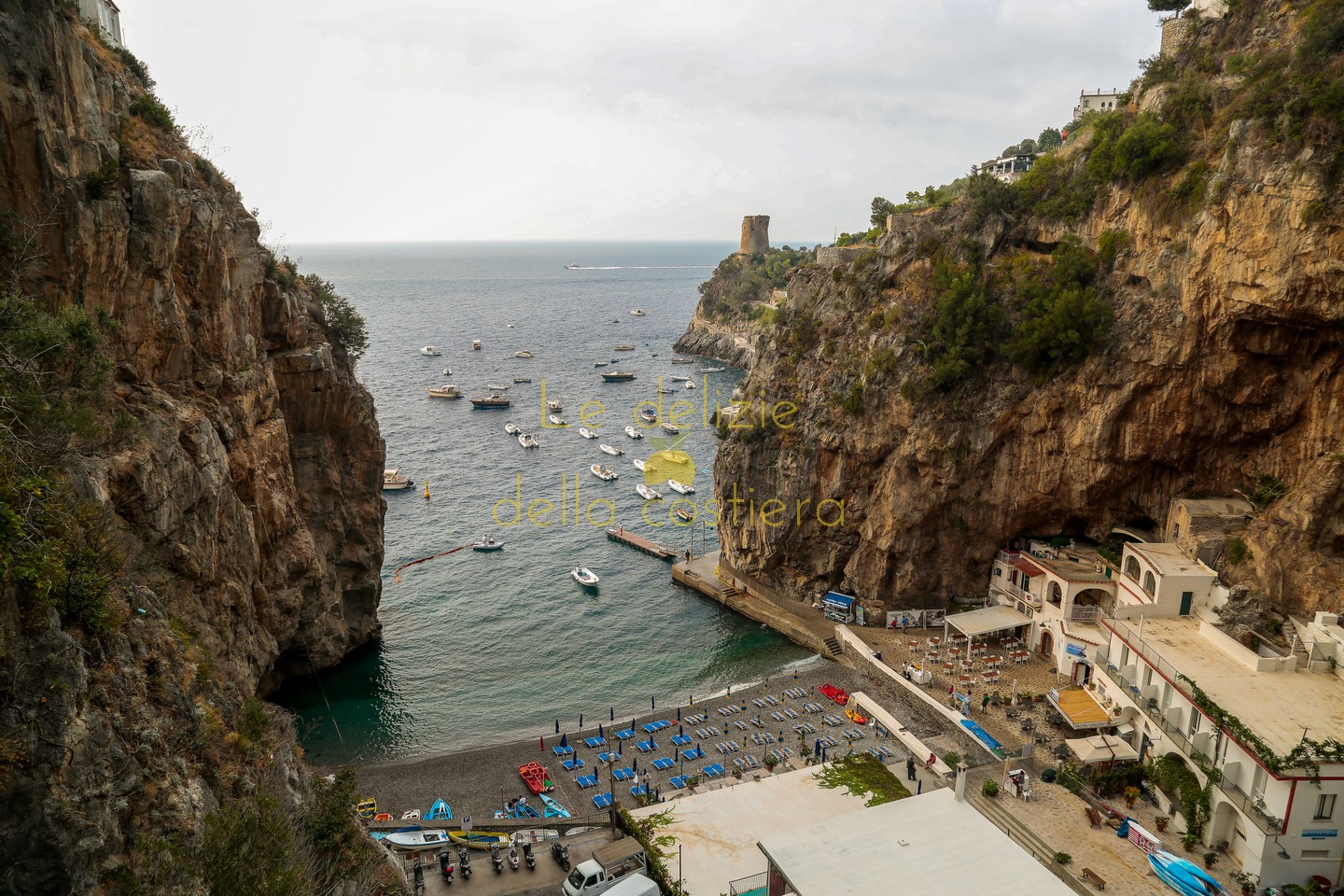 The Marina di Praia is considered a real jewel nestled among the rocks overlooking the sea. It is a pebbly beach and, given its particular position, it is illuminated by the sun only in the central hours of the day. Access to the beach is quite simple, you can reach it from the ramp of the Strada Statale 163 Amalfitana.

On the side of the beach there is the ancient Torre a Mare and right from the beach begins an itinerary created on the cliff a few meters from the sea level passing right under the Tower and which allows you to make one of the most beautiful and romantic walks of the Amalfi Coast and which leads to the disco "L'Africana", entirely carved out of the rock. 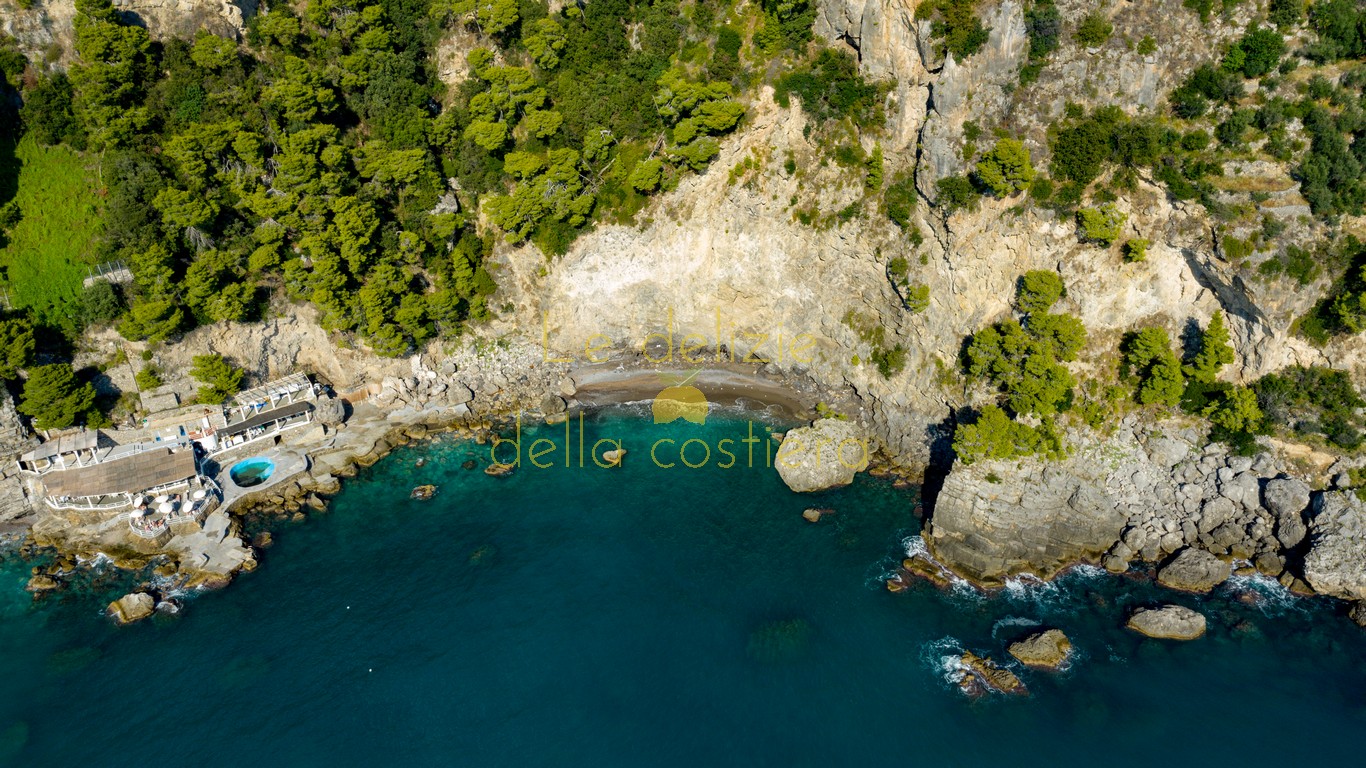 It is a private beach and just thirty meters long. Unlike the Marina di Praia which is easily accessible, to access the Gavitella beach you need to make many stairs or you can reach it by sea through the shuttle services. Inside the bathhouse there is also the famous restaurant "La Gavitella". It is a destination for many tourists because, thanks to the western exposure, you can admire one of the most beautiful sunsets with the views of Positano, the Faraglioni of Capri, the Isle of Capri and the Isle of Li Galli. Near the Cala della Gavitella there is the Altar Fountain, a natural swimming pool created in the opening of a cave.

In the hamlet of Vettica Maggiore there is the ancient Convent of Santa Maria a Castro dedicated to San Domenico and in honor of the Saint every year the event of the illuminations is celebrated. Every year from 30 July to 4 August, the day of the feast of San Domenico, in the Piazza San Gennaro which is near the Convent, numerous lights are lit offering unique images. The tradition of the illuminations is very ancient and has been handed down since 1606. It is said that the mother of San Domenico, before giving birth, dreamed of a dog with a torch in his mouth that set the world on fire: this dream was given the meaning that the baby would bring the Word of God all over the world.

After a short period of decline, the event of the illuminations of San Domenico over the years attracts more and more tourists, a sign of devotion to the Saint and for the unique images that the inhabitants of Praiano offer as they adorn the windows, terraces, candles with candles and candles. gardens and stairways of the place. In addition, each evening features different events and shows, all not to be missed.