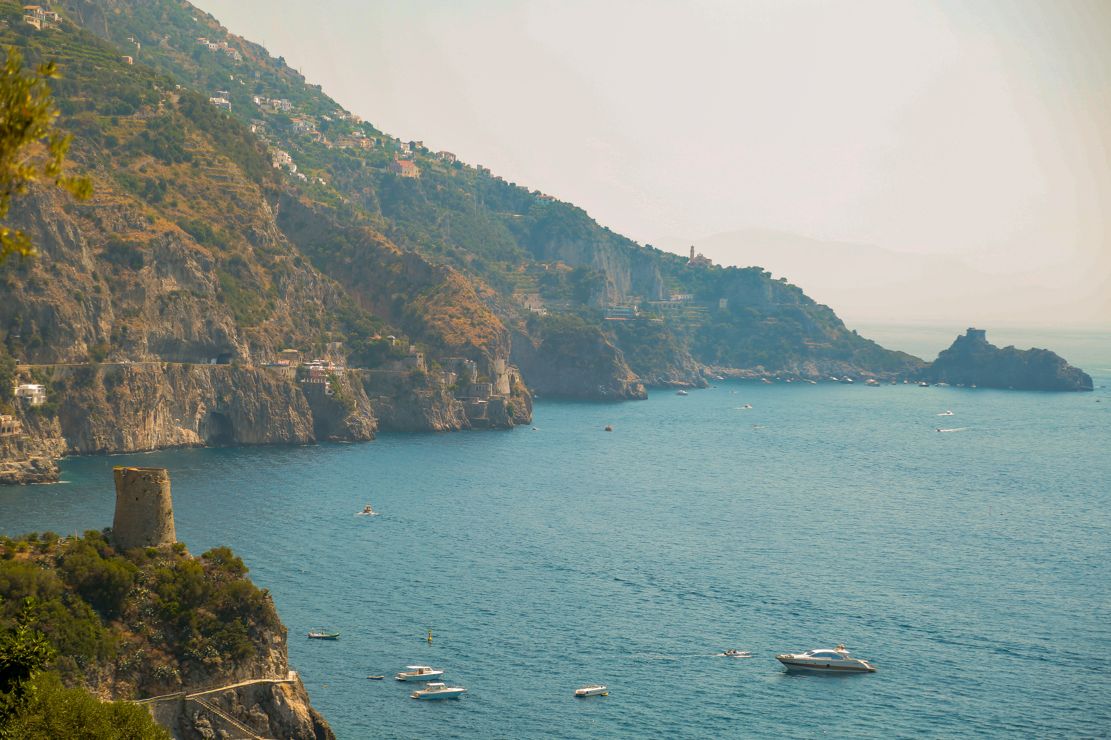 The Municipality of Conca dei Marini is considered by extension the fourth smallest municipality in Italy and the second in Campania after Atrani. It is called "Conca" due to the geographic conformation in the shape of a basin located on the sea about 5 kilometers from Amalfi with the addition of "Dei Marini" since in the past the coastal village was inhabited by skilled and numerous experienced navigation merchants. For this latter reason, Conca dei Marini is also called City of mariners to indicate the importance that the ancient seaside village has covered in the past.

Currently Conca dei Marini includes about 3 kilometers of coast which start from the east just before the Marina di Conca which is a small bay surrounded by numerous very characteristic houses and represents the main bathing establishment in the country and then includes the famous Capo di Conca with the Torre del Capo di Conca, also called “Torre Saracena” or “Torre Bianca” to include the “Grotta dello smeraldo”. In a few kilometers of coastline, unique natural beauties are concentrated and appreciated by thousands of tourists from all over the world.

The ancient houses of Conca as well as those of the Amalfi Coast are scattered throughout the territory and develop on two levels: the lower rooms were mainly used for storage and cellars while on the upper level the rooms almost always stand with vaults.

HOW TO GET TO CONCA DEI MARINI

You can also reach Conca dei Marini from Sorrento and follow the signs for Positano and then always take the Strada Statale 163 towards Amalfi.

Conca dei Marini can also be reached if you exit the Castellammare di Stabia tollbooth from the A3 Napoli-Salerno motorway and then follow the directions for Agerola taking State Road 366. 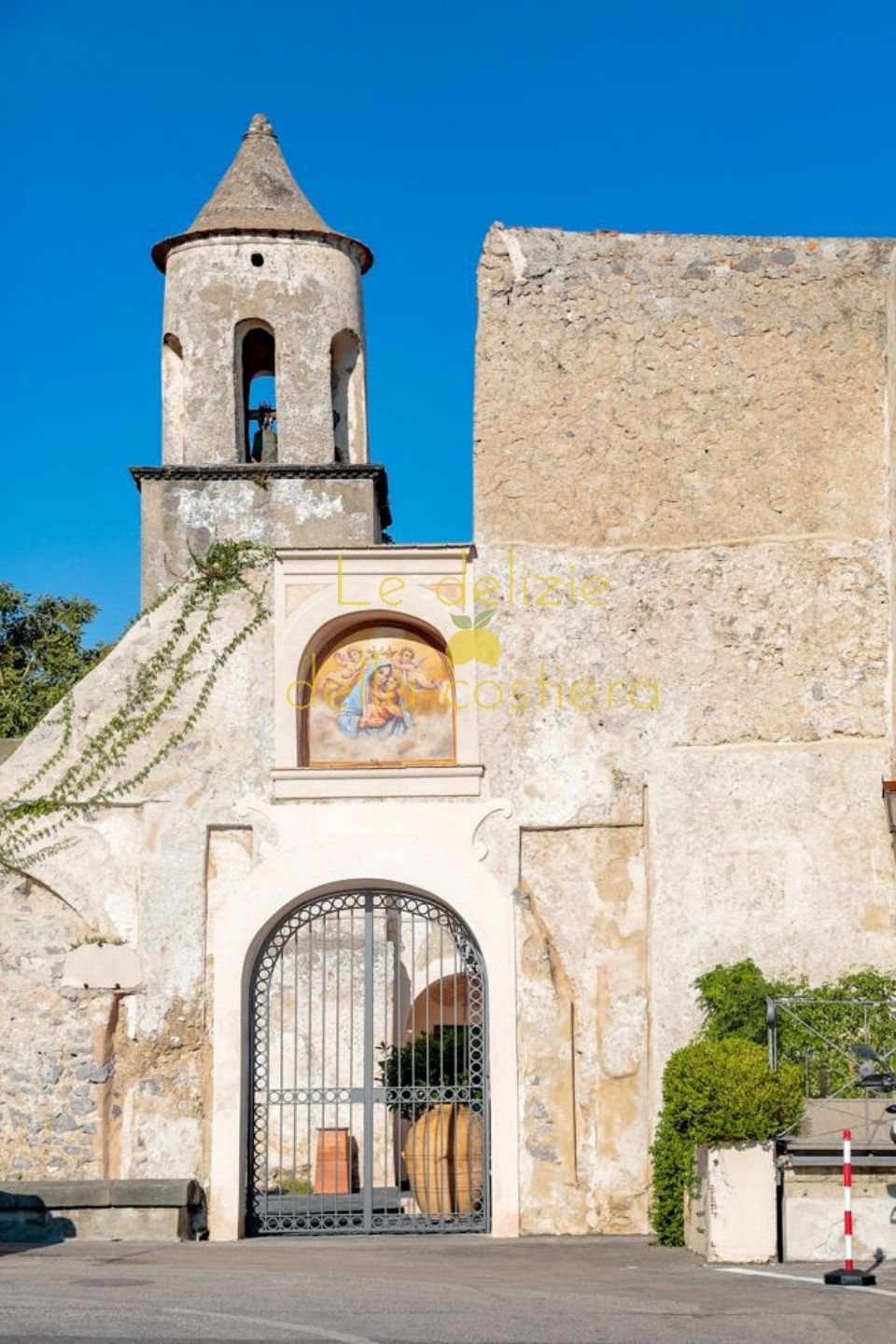 Conca dei Marini is famous above all because around 1600 in the Santa Rosa Convent which is currently a luxury hotel complex, the “Sfogliatella Santa Rosa” was discovered which took its name from the name of the Saint to whom the Monastery was named.

A nun cook of the Convent first created the filling of the sfogliatella which was originally a cream obtained by adding cooked semolina to the milk; later he added lemon liqueur, dried fruit and sugar.

For the external dough, however, the nun added some lard, sugar and to the bread dough white wine. After working this dough, he flattened a small amount creating a hood-like bag of the nuns, subsequently inserting a small amount of the filling. After closing the bag, he put it in the wood oven and once it reached a golden color, he baked the delight garnishing it with a cord of custard and candied black cherries. The secret recipe of the Santarosa sfogliatella remained secret for many years and only the Neapolitan pastry chef Pasquale Pintauro in the early nineteenth century managed to have the recipe. He made changes to it by creating the “Riccia” Sfogliatella.

Today the Sfogliatella Santarosa has a triangular shape externally composed of thin layers of overlapping puff pastry containing the filling consisting of semolina, eggs, milk, sugar and candied fruit. It is always garnished with a layer of custard and cherries in syrup.

As a form of authorship of the Sfogliatella, in Conca dei Marini every year the Sagra della Sfogliatella Santarosa is organized which attracts many tourists and enthusiasts.

Conca dei Marini is also famous because in the terraces, in addition to being cultivated with lemons as well as throughout the Amalfi Coast, the "are grown Piennolotomatoes" (bell-tower cherry tomatoes). The mild climate, the proximity of the sea and the heat of the sun allow the cultivation of this special type of tomatoes which, just harvested in clusters and thanks to the skill of the farmers, are placed vertically to form a bell tower. Subsequently they are conserved in the fresh cellars of the conchesi to be consumed all year round without the addition of preservatives. They are excellent ingredients for making delicious fish soups which are definitely the dishes to choose for those who decide to stop for lunch or dinner in the lovely restaurants on the coast of Conca dei Marini.

According to historical findings, Conca dei Marini was founded by the Tyrrhenians and then conquered by the Romans. Already in that period the first inhabitants dedicated themselves to fishing and when it subsequently became an integral part of the Duchy of Amalfi, Conca dei Marini had 27 large galleons demonstrating the skill of the sailors. With the end of the Maritime Republic of Amalfi, Conca also went through a period of crisis that was overcome under the domination of the Bourbons where commercial traffic began again and with importance. However in 1500 there were 2 negative events for Conca: around 1530 there was an epidemic of plague while in June 1543 there was a looting by the Turks. In 1861, with the expulsion of the Bourbons, Conca dei Marini passed to the Kingdom of Italy and during the fascist period the Municipality of Conca was annexed to the Municipality of Furore. Only with the end of the Second World War did the Municipalities of Conca dei Marini and that of Furore return to being independent.

As mentioned above, even if the surface of the Municipality of Conca dei Marini is rather small, there are numerous natural and historical-artistic beauties to visit.

It is the main church of Conca dei Marini but is known as the Church of Sant'Antonio of Padua because it is the patron saint of the city. It is very old and consists of three naves divided by two rows of large columns. The floor was replaced when the restoration was carried out in 1909. The bell tower has a cusp vault covered with majolica tiles. 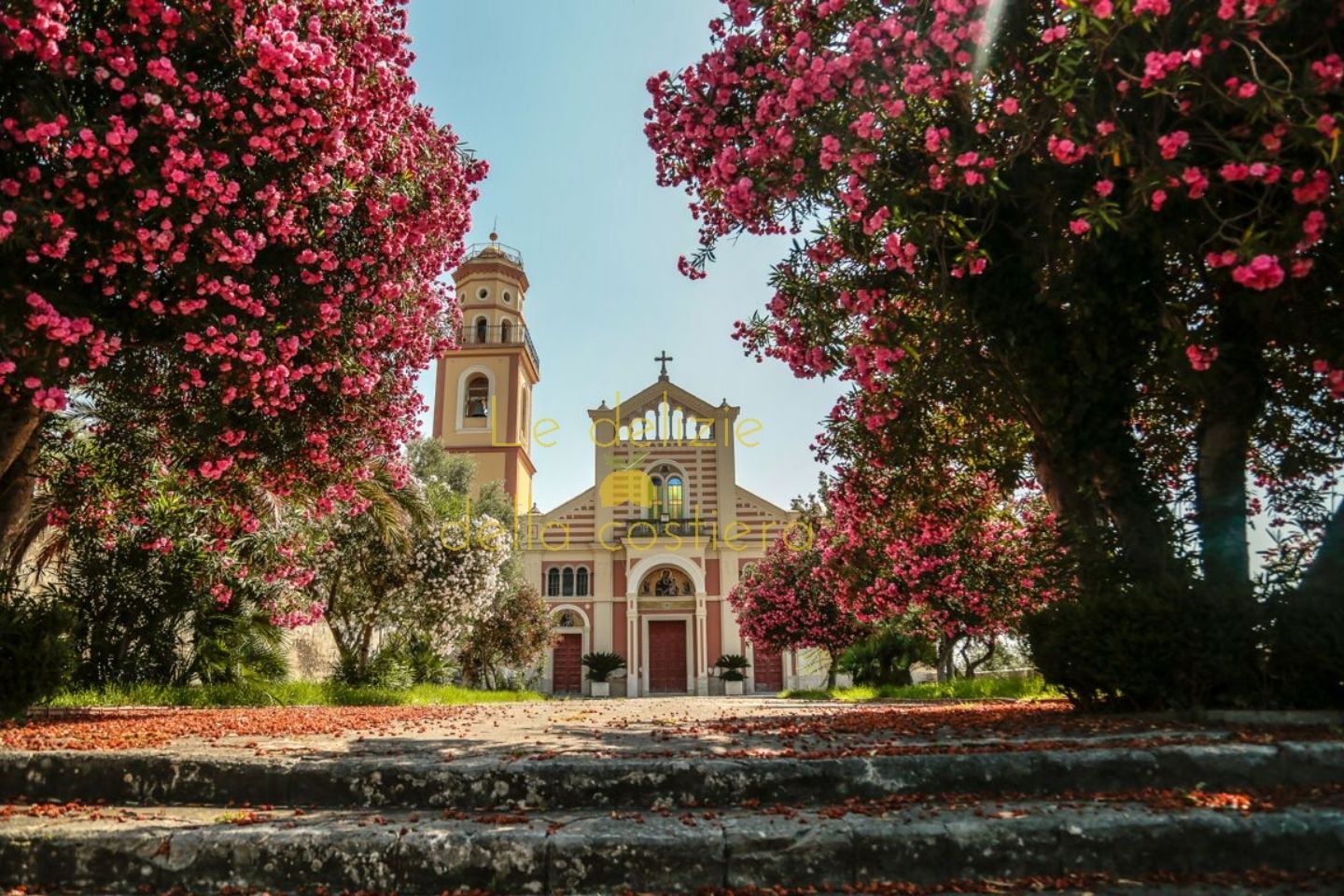 It rises in a unique position and the Church is surrounded by a vast courtyard on which two rows of palm trees are arranged in front of the three entrance doors. On the three doors there are mosaics depicting the Madonna del Carmine in the center, San Pancrazio on the right and Sant'Antonio di Padova on the left. The interior of the Church is made up of three naves and three apses and the side naves are dominated by cross vaults. Next to the church there is the wonderful viewpoint called Punta "Vreca" because it has the shape of a ship.

·         Church of San Michele Arcangelo
It rises in “Penne” and is immersed in the green of Conca dei Marini. It is a very old church and has a flat apse with a main altar from the 1700s. Due to the weather, the floor is quite damaged. 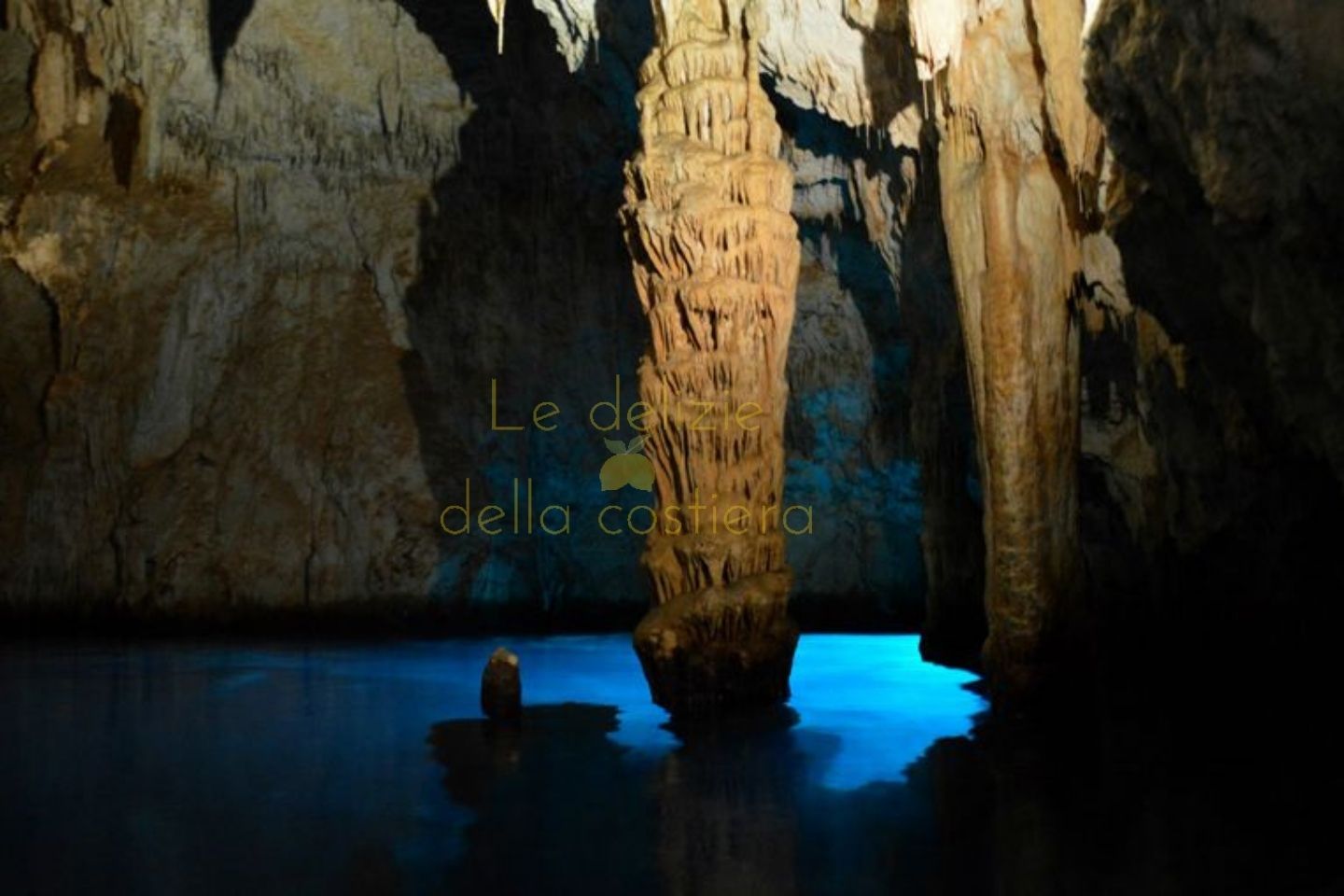 The Grotto was discovered by the fisherman Luigi Buonocore only in 1932.

It is a karst cave about 45 meters long, 32 meters wide and 24 meters high. It is so defined because the water inside the cave takes on an emerald color due to the sunlight that passes through an underwater slit and that connects the cave to the open sea. Thanks to this effect, anyone who visits the cave remains entranced. 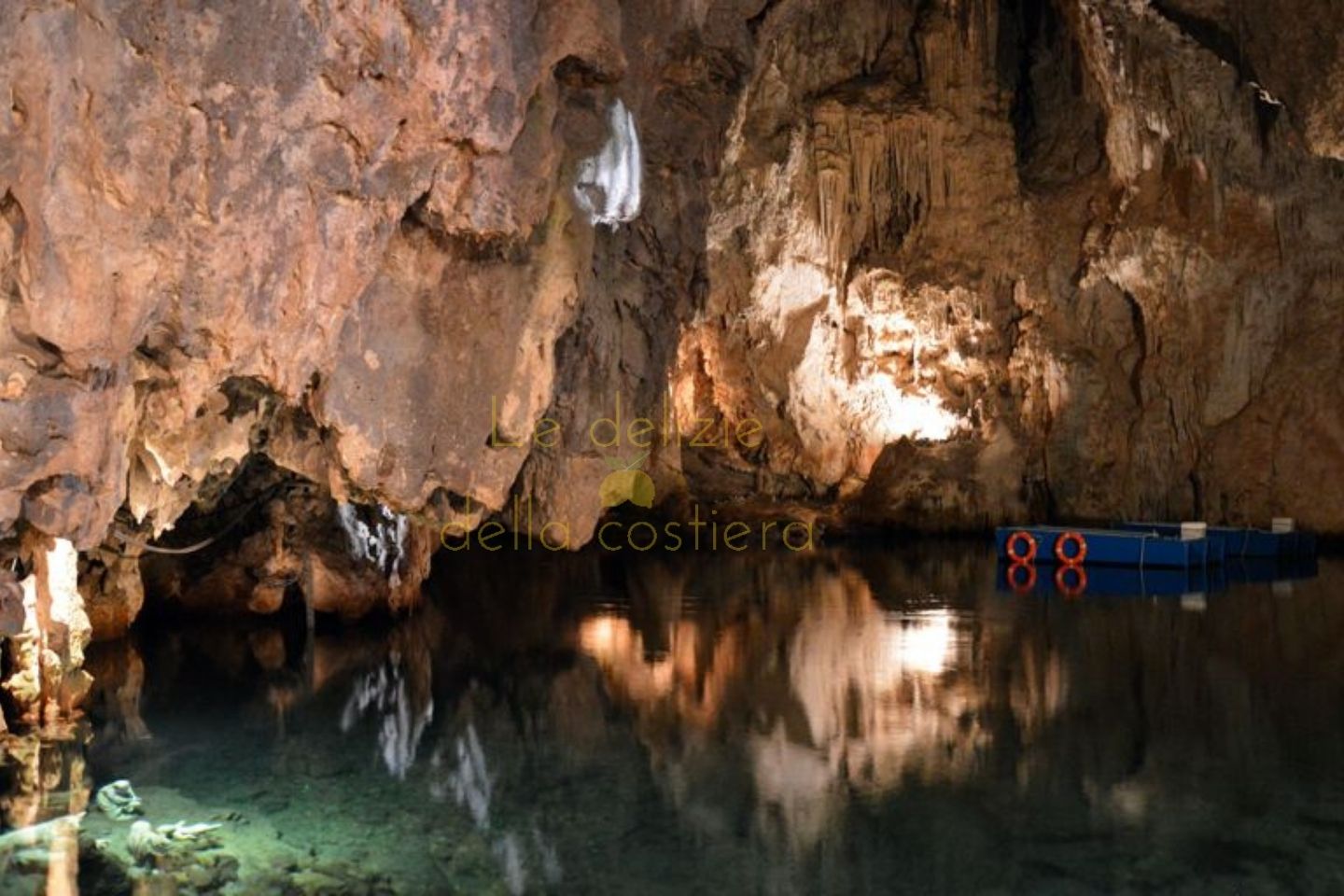 In the past, the cave was located above sea level and inside many stalactites and stalagmites were created, some forming tall columns. With the phenomenon of bradyseism, the soil has slowly lowered until it reaches below sea level and, therefore, only recently the Emerald Grotto is partially covered by the sea.In 1956, an underwater nativity scene was set up on the seabed of the Emerald Grotto made up of various ceramic figurines and every year during the Christmas season some divers for devotion place flowers on the Nativity. 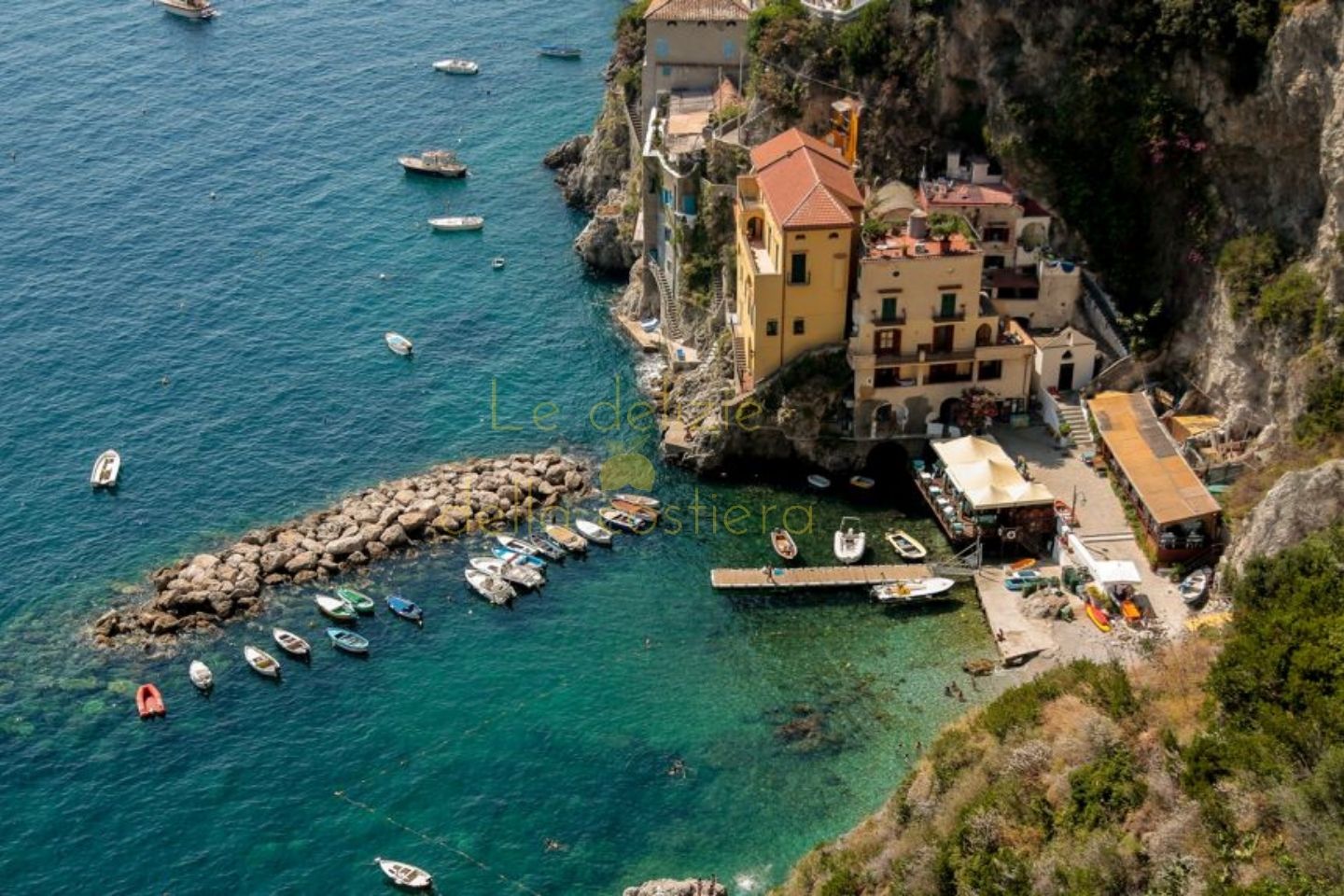 The Marina di Conca has a very special charm because it is a small bay surrounded by several houses perched and with a clear blue sea more beautiful of the entire Amalfi Coast: in fact in 2003 Legambiente defined it among the 11 best beaches of Italy. Precisely for its particular beauty and for its strategic position and conformity, in the sixties it hosted several famous people including Sophia Loren and Carlo Ponti, Gianni Agnelli and Jacqueline Kennedy Onassis (who also visited Ravello and Amalfi). 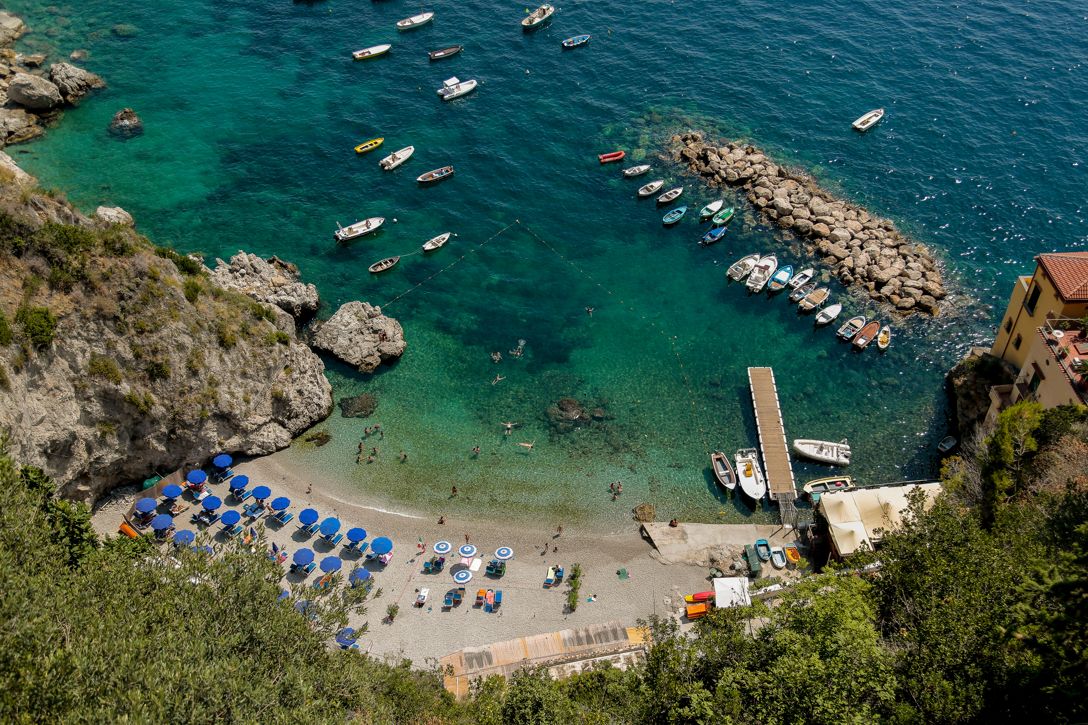 It is currently the main beach of Conca dei Marini also equipped with a marina where the boats of tourists and local fishermen who catch fresh and precious fish dock thanks to the particular shape of the seabed and the quality of the waters.

Near the beach there is a chapel dedicated to the Madonna della Neve which is celebrated on August 5 of each year also with a particular procession by sea. In the chapel there is an ancient sculpture from the east which depicts the Madonna with the Child Jesus.

To signal the importance that the beach has covered in the past, from the 17th century the mayor of the town of Conca dei Marini in August was publicly elected right on the beach. 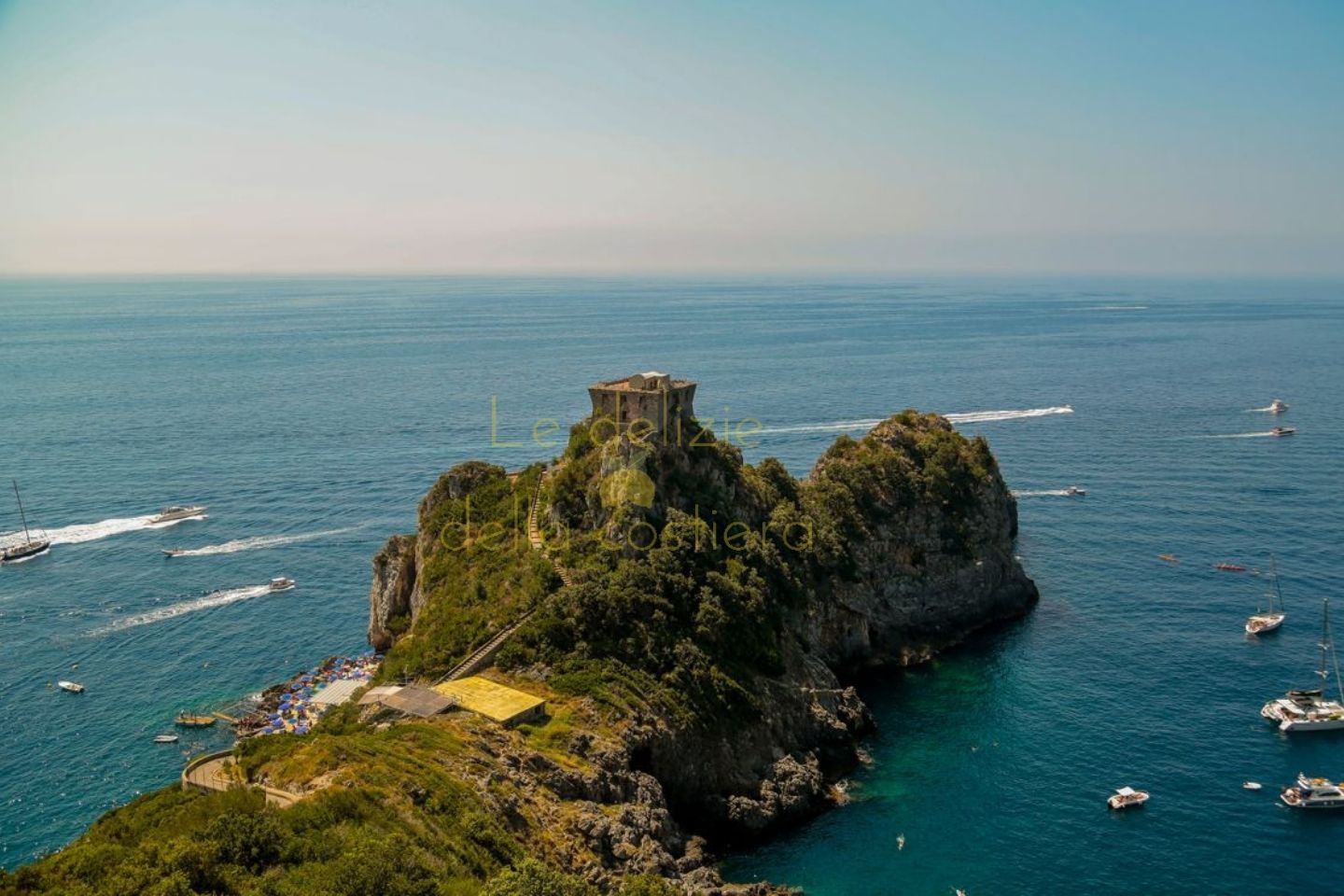 The complex is composed of the Church of Santa Maria di Grado on the left while on the right there is currently a luxury hotel located on the rocky outcrop from which you can admire the Gulf of Salerno and a unique panorama. The hotel stands where once there was the Conservatory of Santa Rosa da Lima and previously a monastery of Dominican nuns where the Santarosa sfogliatella was invented by the nuns of the monastery. It is said that the monastery was erected in the second half of the 1600s by the Pandolfo family and the then Bishop of Pozzuoli and originally from Conca dei Marini, Girolamo Dandolfi, donated the skull relic of St. Barnabas Apostle to the Convent. The entry into force of the law of 1866 suppressed the religious house and with the death of the last nun in 1912 all the property passed to the Municipality of Conca dei Marini. In 1924 the structure was purchased by the Roman hotelier Massimiliano Marcucci who transformed the convent into a hotel while retaining its original appearance. As mentioned, the structure was currently purchased by the American Bianca Sharma who has become a large luxury hotel since 2012.