Atrani is the smallest Italian municipality by surface (just 0.9 sq km) and is located about 700 meters from Amalfi. Squeezed between Mount Civita to the east and Mount Aureo to the west, Atrani extends along the valley of the River Dragon, so-called because according to legend a terrible fire breathing dragon was hiding here.

Atrani is considered one of the most beautiful villages in Italy thanks to the beauty of the urban fabric made up of alleys, with characteristic "stairways", from houses placed one on top of the other, from arches, courtyards and squares. The first houses face directly onto the beach; then they gather around Piazzetta Umberto I and the Church of San Salvatore and then go up to the Valle del Dragone climbing along the rocky slopes of the Civita and Aureo Mountains and surrounded by gardens and lemon cultivations.

The square of Atrani Umberto I leads directly to the beach through the ancient passage created to save the boats from the storms.

Atrani is one of the few villages on the Amalfi Coast to preserve its ancient character as a small fishing village intact. 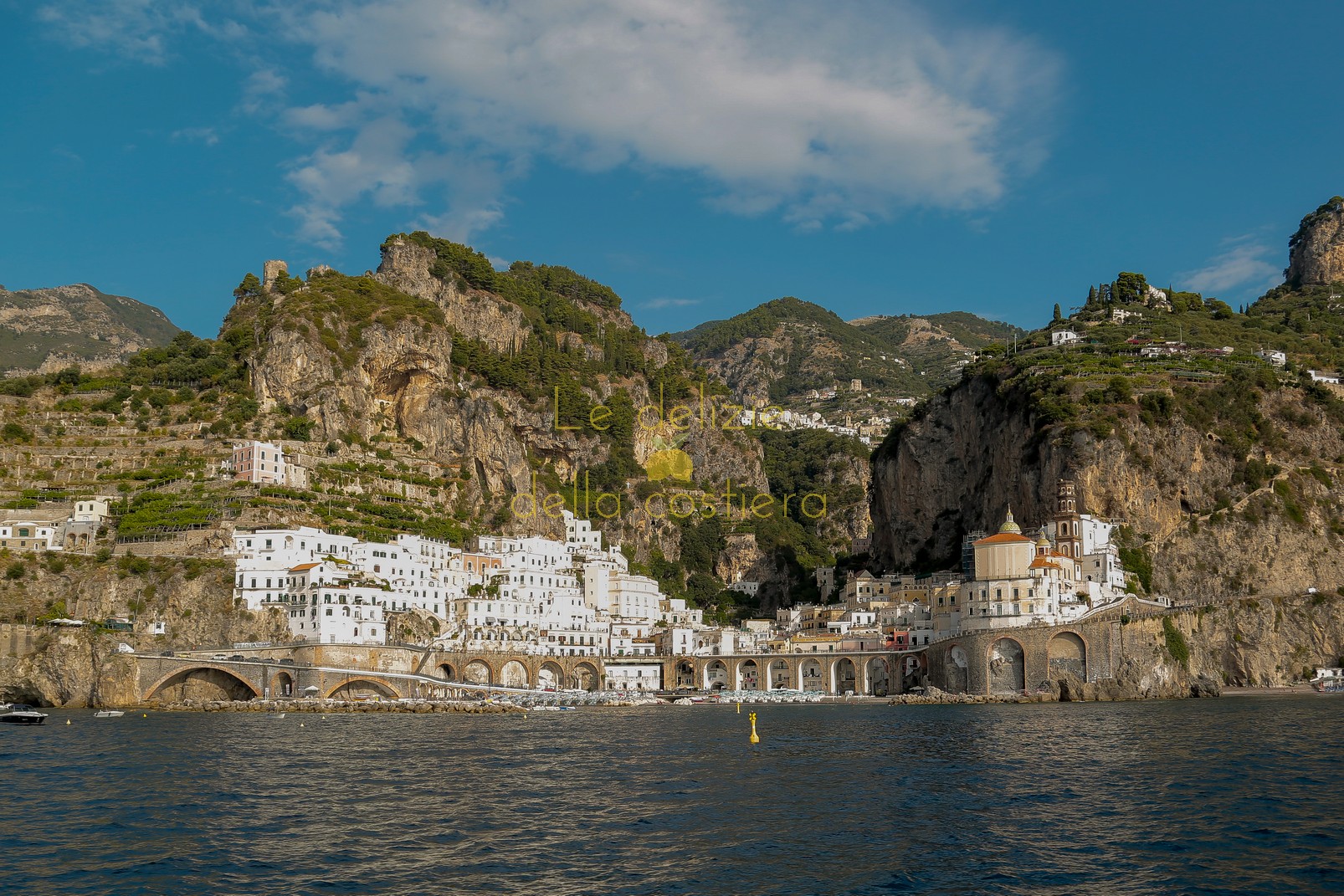 HOW TO GET TO ATRANI

From the A3 Napoli / Salerno highway, exit at the Vietri sul Mare tollbooth and then take the Strada Statale 163 for about 20 kilometers following the signs for Amalfi. The Municipality of Atrani is located about 1 kilometer before the center of Amalfi.

On July 22 of each year, the day of the feast of Santa Maria Maddalena,is served on all the tables of the people of Atrano "Sarchiapone". It is a long pumpkin cut into small cylinders of about 10 centimeters and stuffed with minced meat, fried and then baked in the oven with plenty of tomato sauce. It is similar to cannelloni.

The process is quite simple but the flavor is unique. After scraping the peel of long pumpkins, they must be cut into pieces of about 10 centimeters and cleaned of the internal pulp. The mixture consisting of minced veal, mozzarella, salami, egg, parmesan, salt, pepper and oil must be prepared separately. After inserting the dough into the individual cylinders, the latter must be floured, passed in the beaten egg and fried at not too high temperature. After preparing an excellent sauce with corbarini tomatoes, the cylinders should be placed on a baking sheet, sprinkled with the sauce and baked for about 40 minutes at a temperature of 180 °.

The typical dessert of Atrani and which concludes the lunches of the feast of Santa Maria Maddalena is the "Pasticciotto cream and black cherry". These are oval-shaped sweets of fragrant shortcrust pastry containing a fragrant Amalfi lemon pastry cream with sweet candied black cherries. It is a dessert that in its simplicity delights the palates of the many tourists who visit Atrani.

The origins of Atrani are still unknown today. Archaeological research has established that in the 1st century AD along the Amalfi Coast existed Roman villas, which were, however, covered by the material that erupted from Vesuvius in 79 AD, had deposited on the surrounding mountains and from there, subsequently , had collapsed downstream. In the fifth century AD, following the barbarian invasions, many Romans fled the cities and took refuge first in the Lattari Mountains and then along the coasts, where they created stable settlements. The first documentary proof of Atrani's existence is represented by a letter from Pope Gregory the Great to Bishop Primenio dated 596.

At the time of the Maritime Republic of Amalfi, Atrani was the place where the Amalfi nobility lived, so much so that the Doges were crowned in the ancient Church of San Salvatore de 'Birecto by affixing the dog's hat (hence "birecto"). In fact, Atrani occupied an important position for the economic and social development of the Republic thanks to the factories of fabrics and pasta factories. In the settlement of Atrani particular importance was given to religious life: there were about 300 structures of worship between churches and private chapels. In 1222 San Francesco d'Assisi crossed the Amalfi Coast and also stopped in Atrani. However in 1343 a tsunami flooded most of the houses and put an end to the splendor of Atrani and Amalfi already proven by the continuous incursions of the Pisans of the XII century. In the following years the duchy was incorporated into the Norman territories of southern Italy.

In 1734 with the advent of the Bourbons in the Kingdom of Naples, there was a wave of culture and development that reached up to Atrani: in fact, paper mills, fabric factories and especially pasta factories were built along the Dragone valley.

·    The small Church of the Immaculate Conception 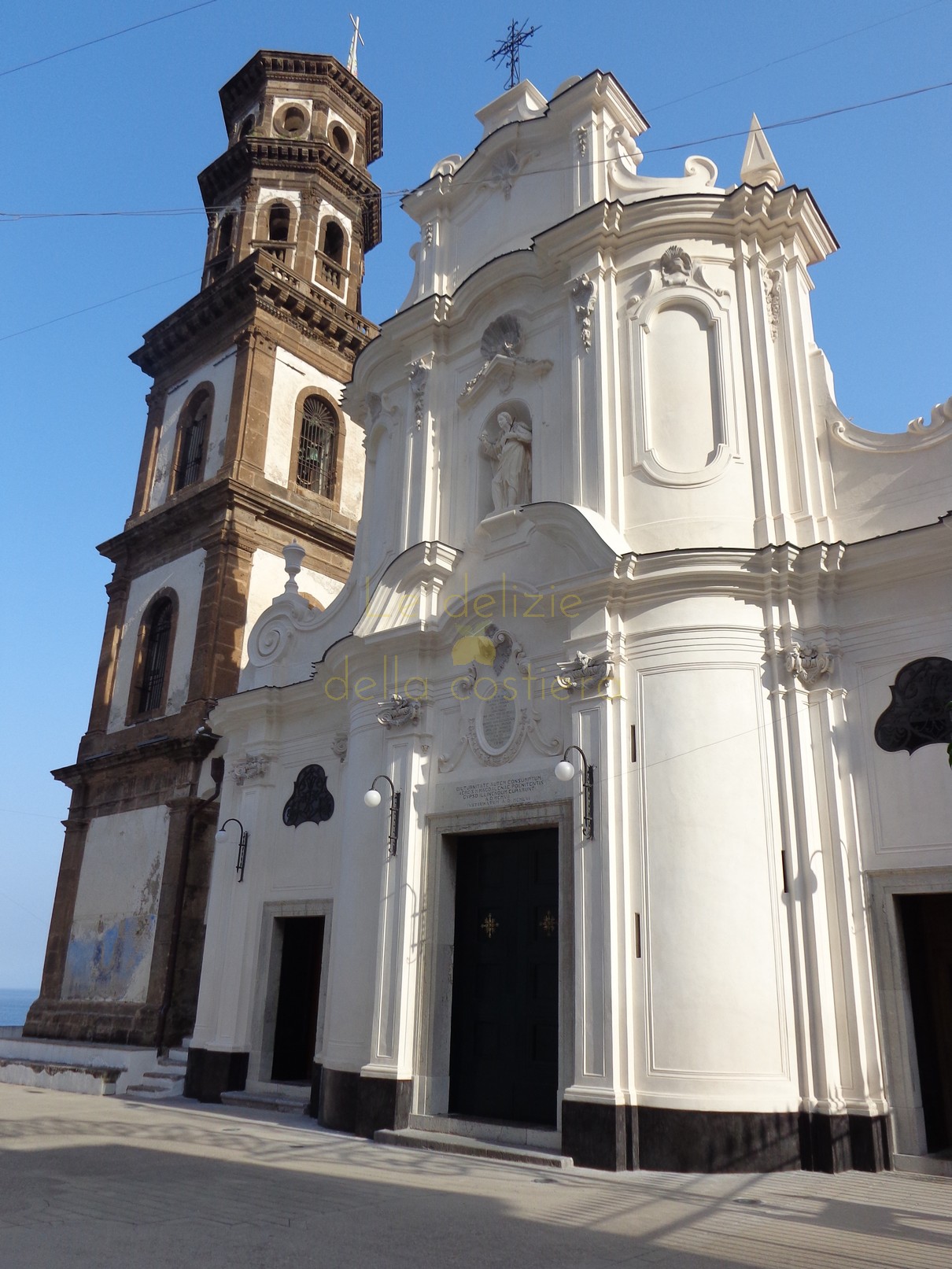 According to the most recent studies, the Cult of Santa Maria Maddalena in Atrani dates back to the first half of the XII century while the Collegiate, dedicated to the Saint, was erected in 1274 on the ruins of a medieval fort. It is said that the Atranesi wanted to thank the Patron Saint for having freed them from the installation of a handful of Alexandrian sailors sent by Manfredi the Norman around 1100: the sailors had come to the country to punish the Atranesi, guilty of siding with the Pope , in the struggle between papacy and empire.

Over time the Church has undergone significant restoration works.

In 1570, degraded and in very precarious static conditions, it was arranged thanks to funds found with particular taxes on the import of grain and on the export of artefacts. The building underwent a second intervention almost a century later, precisely in 1669. On that occasion, the sacristy was also repaired and equipped with an external buttress. 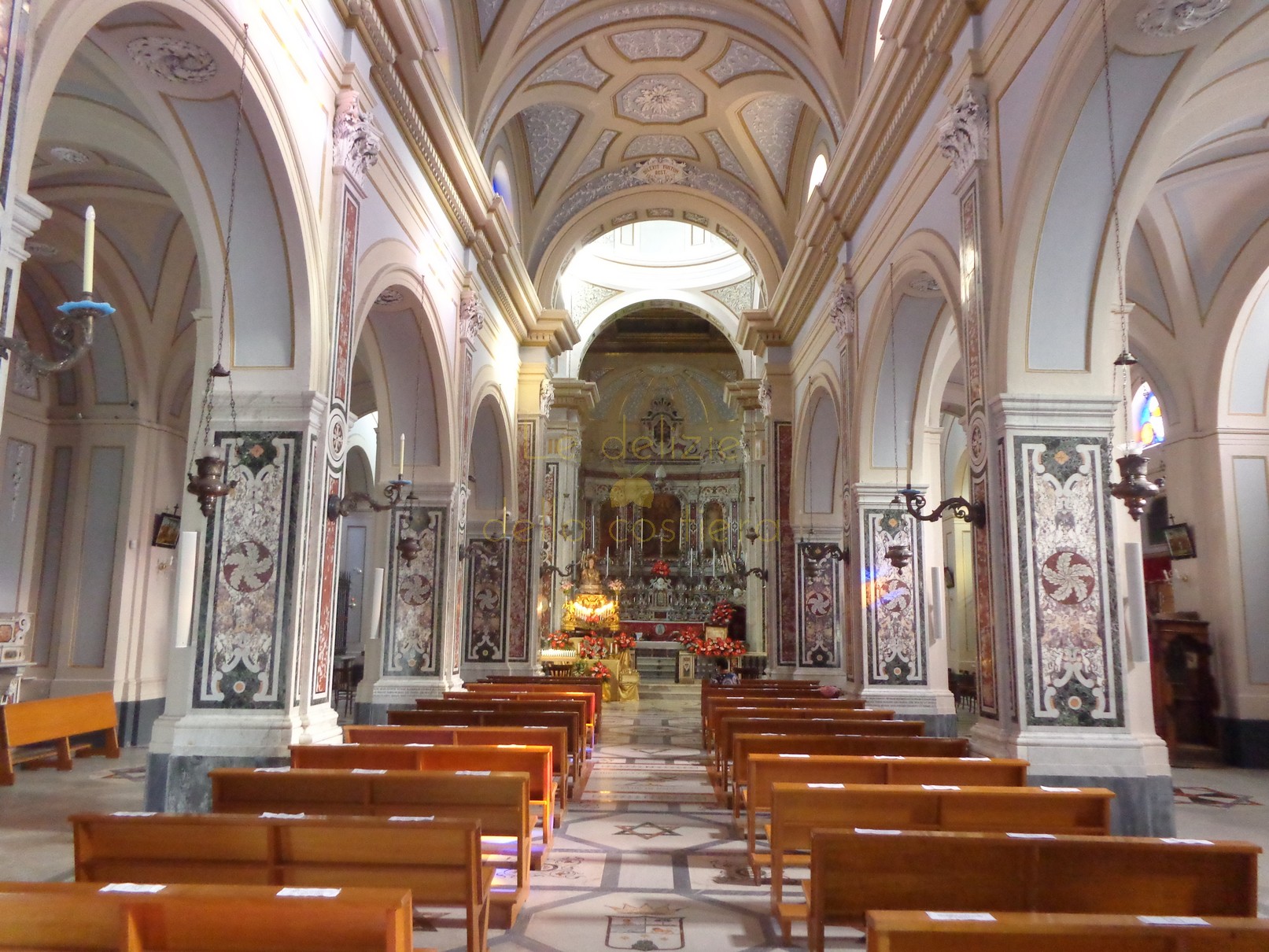 The Church erected as a Collegiate on April 14, 1706 with the bull of Pope Clement XI, due to the now growing population, was enlarged and embellished in 1753 through donations from private citizens, in addition to the contribution of the municipal regiment.

It was on the occasion of these works that the fort was finally demolished in order to recover the space needed for the expansion. 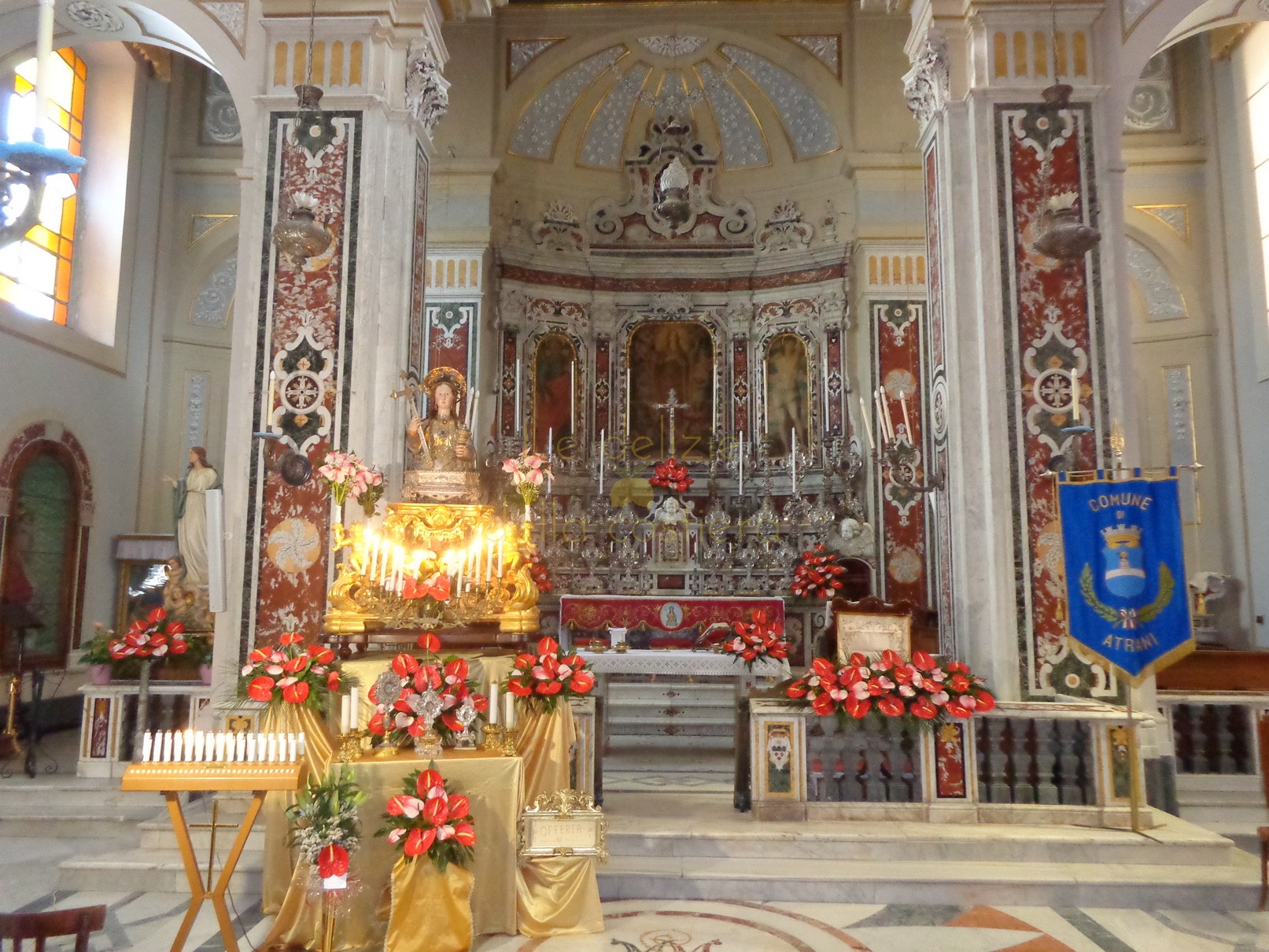 In recent times it was modernized by the architect Lorenzo Casalbore of Salerno.

The temple has the particularity of being equipped with two transepts, one of which is covered with vaults covered externally with majolica, the other instead has a flat roof.

The facade of the church is considered the only example of Rococo on the Amalfi coast. Finally, the soaring bell tower, with its brown tuff, stands imposing and very high.

The celebrations in honor of Santa Maria Maddalena are held on 22 July each year and have been enriched, starting from 2016, with important news for the entire Parish Community. In fact, with the aim of restoring its historical, cultural and religious heritage to the Atranese citizenship, after several years an armored cabinet was reopened inside the Collegiate Church of Atrani and which contains in addition to sacred and valuable objects, especially the Saints The relics of the patroness, consisting of hair strands, some bone remains, shreds of the gown and a fragment of the Holy Cross of Jesus.

The ancient attestations and certifications have been recovered through studies and research in the Collegiate Historic Archive. of authenticity which confirmed the truthfulness of the noble finds.

This building, of great historical and cultural importance for the Campania Region, is linked to the events of the ancient Duchy of Amalfi and to the election of the Doges. Amalfi became an independent city from the Byzantine Empire in the year 839 to become a duchy in all respects in 958, with the rise of the first Duke Sergio. The chronicles inform that the election of the Amalfi head of state took place in public rally, with the intervention of all the people, in the atrium of this church: here, the Doge received the cap (biretum - birecto), teaches of his dignity acquired. This Church also assumed the function of a Palatine chapel since the Doges also received worthy burials here. Furthermore, the representatives of the various peoples of the duchy came to this place to discuss common affairs.

Founded in 940, the church was subjected to numerous restorations and renovations over the centuries and which have largely hidden the medieval structure with the addition of the staircase and the atrium to the beautiful external facade. The church now has a central plan structure with three barrel-covered naves and an interior decorated in Baroque style.

The most important artistic testimonies are represented by the bronze door with inlaid silver valves depicting Christ, the Madonna and Saints, commissioned, like that of Amalfi, in Constantinople by the noble merchant Pantaleone Viarecta, in 1087; a 12th-century Byzantine-style marble pluteus on which two peacocks are carved, symbol of pride and vanity, typical of the Amalfi nobility: there is also a tree on which a hatching bird, mermaids and a hare are placed; a 15th century tomb plate depicts the Atranese noblewoman Filippa Napolitano. After a long period of restoration, on 15 April 2012 the building was reopened to the public and to worship.

The small Church of the Immaculate Conception 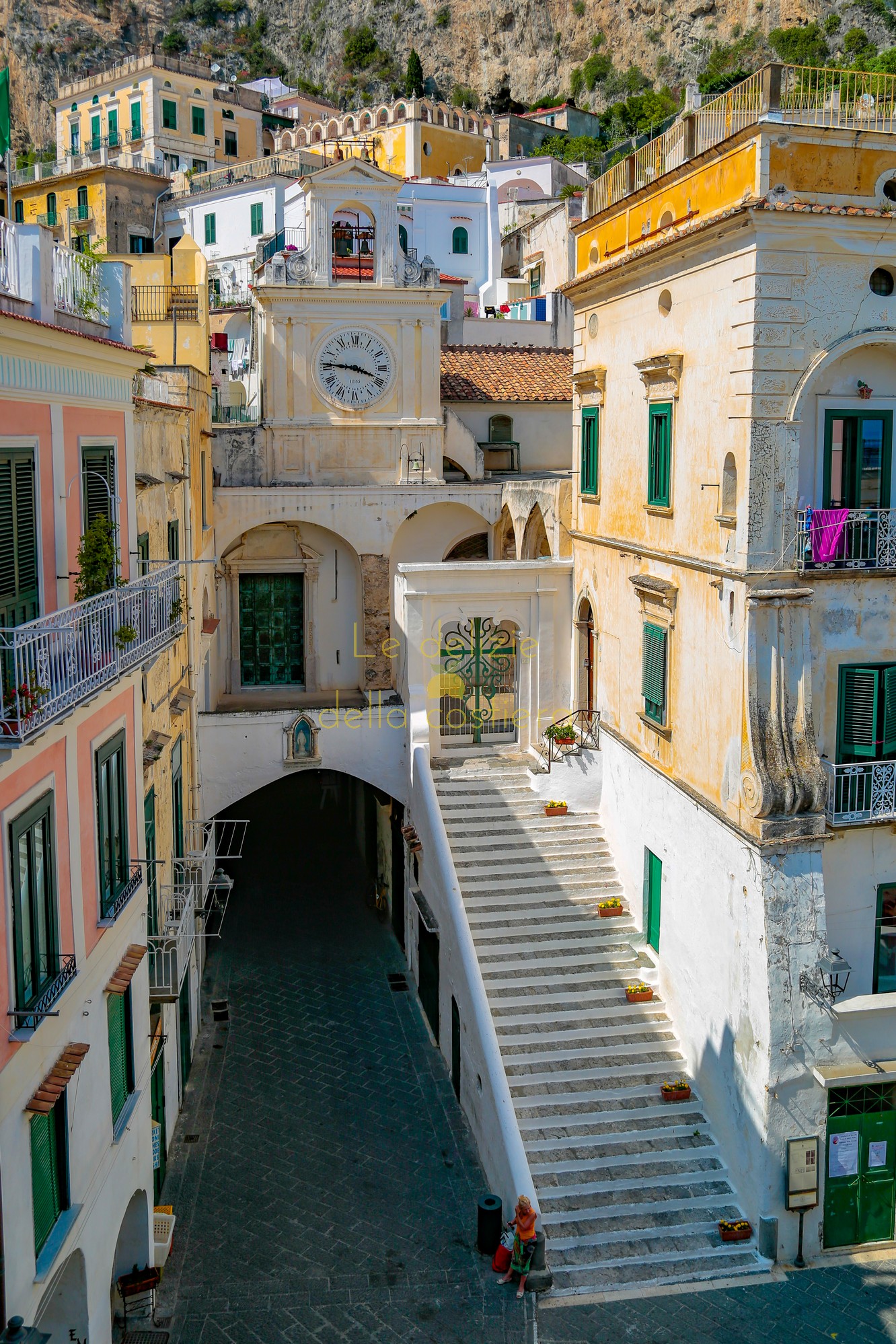 Built in the tenth century on top of Mount Aureo on a small natural terrace at about 145 meters above sea level. The Church has a single hall with a small sacristy. The floor is in square majolica with geometric motifs from the Collegiate Church of Santa Maria Maddalena.

The church is so called because legend has it that the Virgin granted grace to a man, unjustly banished and sentenced tohanging. The episode is portrayed in the fifteenth-century fresco that surmounts the altar where theare depicted Madonna and Child and, on the left side, a man about to be hanged.

According to another version, however, the name derives from the fact that that high hill, thanks to a particular acoustics, was used as a privileged point to proclaim the notices in the sense that the names of those elected to the duchy were banned from the people. 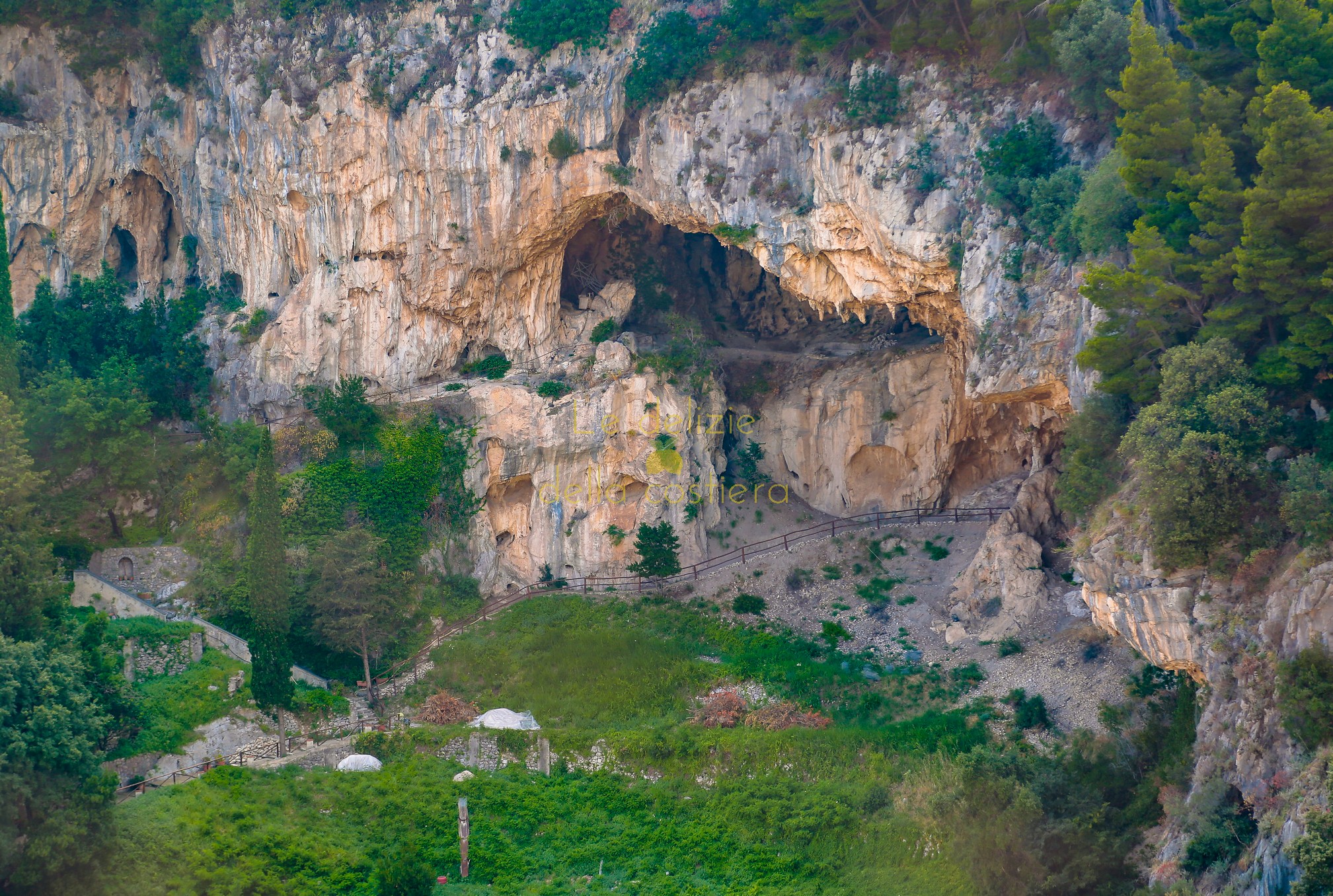 On the eastern side of Monte Aureo,next to the Church of Santa Maria del Bando, there is the cave where the famous pope Masaniello (Tommaso Aniello d'Amalfi) took refuge, who took the lead of the Neapolitan insurrection against the Spaniards in 1647. Below the cave is the home of the maternal family of the famous revolutionary.

Tommaso Aniello d'Amalfi was the main protagonist of the Neapolitan revolution of July 1647 in which the population of the city rose up against the tax burden imposed by the Spanish viceroyal government.

He was born in Naples on June 29, 1620 to Francesco d'Amalfi and Antonia Gargano; although illiterate, he was endowed with lively intelligence and was known in Piazza Mercato for his job as a fishmonger but above all for that of a real smuggler. On 7 July 1647, together with Giulio Genoino, he headed the "fig revolt", that is to say against the imposition of the gabelle on fruit and agricultural products. The protest spread throughout the Kingdom of Naples and the Real Republic was proclaimed under the protection of France and Masaniello was named "Captain General of the Napolitano people". Soon, however, Masaniello, due to an increasingly despotic and extravagant behavior, lost the trust of the people. On 16 July 1647 he fell victim to a conspiracy: hunted by the viceroy's soldiers, for some time Masaniello hid in the cave that has since taken its name.