Tramonti is defined as the "green lung" for its geographical conformation of the Amalfi coast, infact the territory is mainly covered by woods and vineyards within the Lattari mountain range and where you live in direct contact with unspoiled nature. The name indicates a "land in the mountains", from the ancient "intra montes ubertas".

Unlike the other towns on the Amalfi coast where there is a town and several hamlets, Tramonti is made up of 13 hamlets scattered over the area behind Maiori and distributed in a circle around Colle Santa Maria where the Castle of Santa Maria la Nova once stood .

The 13 hamlets are: Campinola, Capitignano, Cesarano, Corsano, Figlino, Gete, Novella, Paterno Sant'Arcangelo, Paterno Sant'Elia, Pietre, Polvica, Ponte and Pucara. Just for the circle arrangement, for trekking lovers it is possible to follow the path that from Pucara fraction, after having crossed almost all the fractions, leads back to Pucara. Given the height and conformation of the place, the climate is rather cold in winter and cool in summer but allows the many tourists who come in summer to immerse themselves in the green of nature, savor the many unique authenticities of the area and find a quiet atmosphere. In Tramonti, therefore, there is a landscape different from the typical maritime one of the other Municipalities of the coast and a unique tranquility. However even in Tramonti you can admire wonderful panoramas: for example from the top of Monte Cerreto (1316 m asl) you can observe part of the Amalfi coast and part of the agro-nocerino-sarnese or reach the top of Montalto and immerse yourself in very suggestive landscapes

To reach Tramonti, just exit at Angri from the A3 Naples-Salerno motorway or at the Pagani exit from the A30 motorway and take the Chiunzi Pass road (Provincial Road 2b).

From Vietri sul Mare just take the Amalfi State Road 163 and, once you reach Maiori, just turn right and take the Provincial Road 2a.

Tramonti is famous all over the world for pizza: it is said that the birth of pizza dates back to the Middle Ages. In every ancient house in Tramonti, in fact, there was a wood oven that was used to make the whole wheat flour biscuit. Subsequently the same dough was used to make the pizza seasoned first with herbs and lard and then topped with cherry tomatoes, olive oil, garlic, oregano and salted anchovies. All those who tasted the pizzas of Tramonti were always impressed by their goodness and it is said that since the second post-war period there has been a large migration of the Tramontan pizza chefs in northern Italy thus promoting the spread of Tramonti pizza also in the north. The new generations of pizza chefs are fortunate to learn the secrets of the trade from the ancient pizza chefs of Tramonti.

In Tramonti there are also several dairies (including the Vitagliano Dairy) which still produce an exquisite mozzarella, fiordilatte, and excellent caciocavalli. Thanks already to a milk of the highest quality produced by animals grazed on the green and unspoiled hills of Tramonti and to the wise and ancient processing of the cheesemakers, the products obtained such as mozzarella, white and smoked scamorza, cheeses and caciocavalli have a unique flavor enough to be requested by anyone who has tasted them

Tramonti is also famous for its wines. On the territory there are centuries-old vines that allow you to make excellent Costa d'Amalfi DOC wines - Tramonti sub-area. Particularly requested by experts is the Tintore wine, an autochthonous and expressive grape that enhances the Tramonti area. In addition to the Tintore, the other types of grapes are: Aglianico and Piedirosso for the DOC Red Wines and Falangina, Pepella, Ginestra and Biancolella for the White DOC Wines.

In the ancient Royal Conservatory of Saints Giuseppe and Teresa, in the hamlet of Pucara, one of the oldest liqueurs on the Amalfi Coast was born: the concert liqueur. It is called "concert" precisely because of the harmony and harmony of the flavors of the herbs that compose it. In fact, the religious of the Conservatory, having available many herbs and spices such as: licorice, fennel, nutmeg, cloves, edelweiss and mint, decided to prepare an infusion then adding barley and coffee . Just the addition of barley and coffee made it possible to make the mixture dense and dark in color, making it become a unique product. Originally the concert was conceived by the nuns to distribute it to the women and children they hosted in the Convent to treat them from the seasonal ailments they often encountered. Over the years the concert has become a highly sought after liqueur for its unique flavor and is still consumed today for the beneficial, therapeutic and digestive qualities it possesses. It is often offered to guests as a sign of hospitality.

In the small hamlet of Figlino there is the "Del Borgo pastry shop", a small artisan pastry shop offers unique specialties, thanks to the quality of the raw materials used and the skill of the pastry chef. Almost of specialities are based on the IGP Sfusato Amalfitano lemon which it releases in each sweet has its own unmistakable scent.

The farmers of Tramonti jealously preserve a special breed of cherry tomatoes called "Re Fiascone". It was named so to pay homage to King Umberto I of Savoy when he visited Naples for the first time in 1878. So towards the end of the 1800s it began to be cultivated on all the terraces of Tramonti. However, over time, the other varieties of tomatoes have replaced King Fiascone and only recently, thanks to the care of some Tramonti farmers who have jealously guarded some seeds, it is once again taking on the importance it had

According to the historian Cerasuoli, Tramonti was founded by the Picentines following the invasion of the Romans of the ancient Reghinna Major (the current Maiori): in fact, the Picentines who previously lived along the coasts of Maiori, to escape the attacks of the Romans, were they took refuge upstream building the first farmhouses. Like all the coastal territory, even Tramonti in the Middle Ages became an integral part of the Amalfi Republic: even if not exposed directly on the sea, it nevertheless benefited from the riches deriving from traffic and trade mainly with the east. Thanks to that well-being, in fact, many churches and several ancient monuments were built commissioned by the various noble families of Tramonti and the Duchy of Amalfi

With the discovery of the compass by the Amalfi Flavio Gioia, it is said that it was precisely the Amalfitans who attributed the name Tramontana to the cold wind blowing from the north. Given that Tramonti is located north of Maiori and that, especially in winter and through the Maiori valley, a cold wind blows that reaches Amalfi, the ancient Amalfitans began to call Tramontana that wind that blew from the north. The cardinal points were not shown in the ancient compasses.

The importance of Tramonti also ended with the end of the Maritime Republic of Amalfi following the attacks of the Normans. After the Normans, the Duchy of Amalfi was dominated by the Swabians from 1197 and subsequently by the Angevins of Charles of Anjou from 1266. From 1442 it was ruled by Alfonso of Aragon. In the war between the Angevins and the Aragonese, while Amalfi allied with the Angevins, Tramonti and Ravello sided with King Ferdinando D'Aragona who, to thank for the help received, rewarded the territory of Tramonti with many privileges and declared its inhabitants noble

Among the different sites of historical, artistic and architectural importance, we remember: 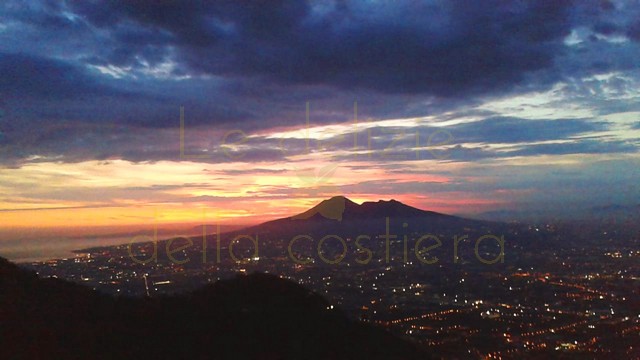 • The remains of the Chiunzi Tower

The Torre di Chiunzi is located on the Chiunzi Pass and was an integral part of the defensive system of the Maritime Republic of Amalfi. Given the position, it controlled the attacks that could have come from the current Agro-nocerino-sarnese and from Naples.

• The Ancient Conservatory of San Giuseppe and Teresa

As previously stated, the ancient conservatory of San Giuseppe and Teresa is located in the hamlet of Pucara and is also famous because the concert liqueur was discovered. It was built in 1662 at the behest of Francesco Antonio Ricca and in 1731 Sant’Alfonso Maria de ’Liguori made a stop at the convent to meet and bless the nuns present.

• Castle of Montalto and Hermitage of Santa Caterina

The Castle of Montalto and the Hermitage of Santa Caterina is located on the top of Monte Montalto in the hamlet of Paterno Sant’Elia and was a fortress located on the northern slope to protect the Republic of Amalfi. Currently only the remains of the castle and the chapel dedicated to Santa Caterina are visible but the path to reach it offers unique scenarios immersed in the green of the Lattari Mountains. It is said that the castle was erected during the period of the Duchy of Amalfi and played an important role in the battle of 1127 between the Normans and the Amalfi people. In fact it is said that the Normans attacked the fortress but found the defense of the tramontani who, at first, managed to defend the last bastion of the Duchy of Amalfi but then nothing they could when the Normans increased the attacks so the whole Duchy of Amalfi ended under the domination of the Normans marking the end of the Maritime Republic of Amalfi.

The castle is located on the top of the Colle di Santa Maria. The construction authorization was granted by Alfonso I of Naples to the Prince of Salerno Raimondo Orsini. The castle has a rectangular plan and was surrounded by 16 towers. Inside there were kitchens, arsenals, stables, cisterns and prisons. Since the nineteenth century the castle has become the municipal cemetery and currently 13 of the original 16 towers can be observed